'Dalit' sir and his big 'small'world

You will be wondering about my mental stability for calling somebody a 'Dalit' sir at the time of technological brilliance and advancement. Back on1955 people of a particular village in Kerala used to call a teacher the same name as a part of religion made barriers and caste biases, which was the practice across India. This real life story has actually written by my father(Thamarakulam Ravi) during his college days and won the 'Best short story' award on 1973, now recreated by me. I tried my level best not to make the story banal. My father hails from a small picturesque scenic village called Thamarakulam in Kerala which I was referring to.

1955, A time where India as a country was hovering with poverty, religious biases, economical catastrophe and intellectual depletion, but patriotism at its very best. Our country and people has shown exceptional courage and grit to come out of all post independence effects but not from the caste bane. Thamarakulam was the perfect example of a village with scenic locations,greenery,water falls and innocent people who were religious. The nearest city was Kollam and it was considered as the main business center buzzing with activities.

Origin of the name 'Dalit' Sir

Dalit sir was a primary school teacher in this village with an exceptional acumen and superior intelligent quotient. He belonged to a Dalit caste called 'Parayans' as widely known in Kerala. All the lower caste people  in Kerala had gone through all type of mental and psychological trauma from the higher caste. Dalits were primarily used for all type of labor work of high caste people and they were not even allowed to visit temples. They were the condemned class and there was no respect shown. There was a time where they were not allowed to come face to face with a high cast fellow. Such was our caste partitions which divided our society thereby, exposed people to 'religion active' toxic waste. My Dad was a pupil in the same primary school. Dalit sir toiled  through out his entire childhood financially. But his parents supported him to get higher education since he was very good at studies. He was the first person in his entire caste to clear Class X with distinction in spite of all types of hurdles created by society, caste and poverty. He had shown tremendous will power to weed out all the problems and completed his degree from City college. He decided to work for the upliftment of Dalits and wanted to pull them out of their miseries, through education. He joined as a primary school teacher even though he had better career opportunities.

The villagers started calling him Dalit sir because of the rarity of the incident of a lower caste person becoming a teacher. He never objected for the same. He taught many students and imparted them with knowledge. His way of teaching was different, earning the respect of entire village. The pupils also started calling him the same name and after some years, he became an important and respectable person in the village but with the name 'Dalit Sir'!!! Is it irony or respect? Let the villagers decide!!! Dalit sir himself forgotten his actual name in due course of time!!!

Dalit sir was a tall person but thin, looked flimsy but energetic. He was bald with a square type eye gear, with an affinity to wear white color dresses. Many of the people who belonged to higher caste were not able to digest the fact that a dalit was teaching their kids. But Dalit sir slowly earned respect of all class of people over a period of time with his comprehension, brilliant expounding and warm-heartedness. He celebrated all his birthdays along with underprivileged dalit kids. He brought them chocolates wrapped in flashy colored papers. These types of chocolates were considered rare and precious those days with kids flocked to get a taste of the same. He used to go to Kollam to purchase these, only to see joy and happiness in the eyes of these innocent kids. He was the center figure for all type of social activities. Apart from social and upliftment activities he found time to study new teaching techniques and etiquette.
Dalit sir used to wear a white colour dhoti which covered, his short pant like under garment, where he used to keep his wallet thereby ensuring the safety of his money. 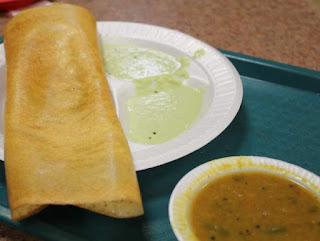 Dalit sir was always happy with his life and there was no regrets for him with lifestyle or situation. He had only one ultimate wish to be fulfilled. There was a Brahmin hotel situated at Kollam. The hotel was famous for its vegetarian dishes and the ambiance. He had seen the hotel during his visit to Kollam. The surprising factor for him was the Brahmin management of the hotel, who were  not reluctant to cater delicacies to people irrespective of religion, with all types of people eating under the same roof. This was very appealing to him because of the caste biases in his village. He always thrived to have a Masala dosa from the hotel but couldn't able to fulfill this wish because of  the shortage of time and  distance from his village.

He finally retired from the school after a remarkable period of teaching excellence and social activities. He received a healthy sum of money after his retirement. He finally decided to visit Brahmin hotel to fulfill his wish on a Friday. There was a flux  of excitement and joy in his heart. The only way of transport to Kollam was steam locomotive (Train)which ran on Coal. He got up early in the morning and was ready for the journey in a flash of time and worn his favorite white shirt and  dhoti. This steam train was famous for contorting the most handsome guys and beautiful girls with its vicious black smoke bellowing out of its mouth. People looked in black irrespective of their color at the end of the journey, which temporarily removed the caste biases!!

The black smoke successfully created shades in the White dress of Dalit sir along with a superb black hair which was actually, partly white. Dalit sir used his small hair comb to comb the coal out of his hair with little success but continued his walk towards the Brahmin hotel. The sight of Brahmin hotel created a spiritual happiness in him. He ordered for Masala Dosa and Coffee. The Masala Dosa was served to him in a leafy plate along with curries made out of coconut. The taste was divine and the satisfaction was amazing. Dalit sir experienced delight which was euphoric and felt a completeness in his life. His face was lively and endured a reduction in age.

The waiter gave the bill and he stood up to take the money which was kept in the pocket of  his under garment. His hand had gone to the pocket but it has not stopped a bit instead gone deep towards his thighs. Dalit sir realized with a shock that his pocket had been cut out of his undergarment along with the wallet and his life time earnings by some one during his journey. His mind was unable to accept the fact that he was in distress. The hand inserted towards the pocket was reluctant to come out and it never came out. He had a deep breath and his heart suddenly stopped, failing the weak and thin body, with his hand in the pocket. The soul of that innocent human being went outside the body with an unparalleled  agony and despair, who fought through difficult muddles, but couldn't able to complete a simple wish. I am still wondering about the caste of the person pick pocketed Dalit sir!!

We can find people like Dalit sir among us, who struggle in their life to come up from caste biases. Our society was not able to accept Dalit sir with his actual name even though his intelligence level was exceptional. Brahmin hotels showcase the possibility of religious harmony, if the society insists and highlights the importance of a  'one religion' society called 'humans' for betterment of economical status. His story clearly underlines the fact that even though you are educated the caste and religion biases will create the necessary void between the people to a considerable amount.

The emotional duality is that small happiness always drives you rather than big achievements. Though you are successful person, you feel on top of the world, once you are able to accomplish your small desires effectively. It can really bring happiness to our big 'small' world.

Please note that I am not downplaying or projecting any caste or thoughts through my blog but simply trying to convey a message to all of you that "Caste, religion and money shouldn't be the yardsticks to codify an individual, but humanity and compassion is"

Thank you Dad for narrating this short story and your thought process back in 1973 through Dalit Sir!!!!