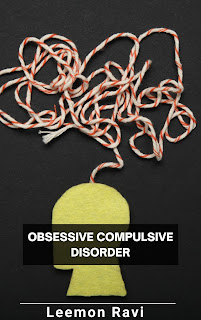 "OCD is a psychological condition, but people won't understand it", told the doctor to Aadya. " It creates tremendous pressure on the head of a person and can evoke catastrophic effects in the mind", he added.  "What is the treatment doctor? ", asked Aadya anxiously. "There is no specific treatment. But do whatever activities which can give you mental happiness. The medicines can calm the mind and relax the stress for a while. But it's not permanent", told the doctor in a frigid manner.

The rain was ferocious. The afternoon was murky. The lightning was generating transitory illumination like a beacon. The raindrops were descending intensely without any remorse. The howling of the wind was fervent as if it was vocalizing something indispensable.  Aadya was troubled. The lint in the room created havoc in her brain. The entire balcony was drenched in rain. She loved the rain and the cool breeze, but not the mess created by it.  She wanted to scream to take her frustration. The thoughts about her aunt, Jaya came into her mind.

"Hold me properly, I am not able to stand and bath, "told Jaya to her sister-in-law in an irritated tone. " Are you out of your mind? Do you want to bathe now? You don't have the strength to stand also". Her sister-in-law muttered.  Some sort of scotch mist engulfed the area. " I am dirty and I want to be clean",  told Jaya in anger. Jaya was bathing aided by her sister-in-law, Subha near the well in front of their home. Subha started feeling the weight of Jaya's body. The drizzle pampered Jaya's body as if it was cleansing her soul.

Jaya was unwedded. Her greatest desire in life was to stop over in a hermitage at Kasi. Her entire life was confined inside the walls of the house. OCD took a great toll on her mind. She spends the majority of her time cleaning household things and cleansing herself. Subha's kids, Aadya and her brother used to call her a lunatic. But Jaya was never rattled. She never fell in love with anyone. " Both of you went outside. Bath and then come inside the house", yelled Jaya at Aadya and her brother.  The kids were irritated. " We already bathed in the morning. We are clean", murmured Aadya. The kids were vexed. But they bathed reluctantly and went inside the house. Aadya always prayed for Jaya's marriage so that Jaya will move out of their house.

But contrary to their thoughts, Jaya remained a spinster and added to their miseries because of her OCD. Jaya was hitched to the home. Aadya's mother, Subha was her only companion. But her behavior was beyond the pale to Subha as well. Even though the ambiance was annoying, the following questions puzzled Aadya " What pushes her to survive? What's driving her? How can a person survive without a goal?".   Her springtime faded away but the OCD flourished stronger with the passage of time.  The only positive vibe felt by Aadya was the sparkle in Jaya's eyes seeing a pristine space. But it was short-lived always. She never fancied the rain, because it inevitably brought her nemesis inside the house called " dirt ".

" Why am I single till now?" Many people came for an alliance, but none liked me. Whether people had problems with hygiene?", Jaya always wondered.  People perceived her as a grumpy person. Her face was vexatious. She always whined. But the mental peace experienced by her after cleaning the dust was unexplainable. She eased up after cleaning the home every time.

The concrete slab around the well was greasy. Subha was not able to hold but somehow she finished bathing Jaya. Jaya's eyes were sparkling as usual. It was still drizzling. A phone call came to Aadya that night. " Your aunt expired in the night. Come home without further ado" told Subha in a shivering voice to Aadya. Aadya was shocked as if a thunderbolt hit her. A desolation was created in her mind. The thought of Jaya was unbearable for Aadya but that day she was grieved. Jaya has literally spent her entire life worried about cleanliness. " She couldn't even fulfill her last wish of visiting the hermitage in Kashi and was locked down as a slave to her mind inside the house. What has she accomplished in her life?", thoughts barraged Aadya's mind.  Aadya felt melancholic sitting in Jaya's room for the first time after the completion of all rituals. She was searching for that grumpy face all of a sudden in that darkness.

"It's time for you to bath, this rain may not stop soon.  We still have to deal with our mind and dirt" the aunt whispered in Aadya's ears.  Jaya was drenched in rain. Aadya can see happiness in Jaya's eyes. The grumpiness has gone. She asked her " Why you have wasted your entire life behind cleaning?" " I never wasted my life cleaning the dust but was stimulating my mind by doing it. My mental peace was balanced when I get rid of dirt" replied Jaya." Strange argument", Aadya chuckled. The Aunt Whispered " I enjoyed every bit of my life because I was happy inside seeing a clean and tidy place. It may be strange for you now, but you will understand this over a period of time."

She vaguely saw the grinning face of her aunt in the dim light of the balcony. OCD creates complications in the brain. Aadya realized that nowadays. Because she also developed the same symptoms.  She forgot to enjoy the rain.  Aadya suddenly woke up from her sleep. The rain ceased but the wind was still howling. Aadya went to the balcony. She felt relaxed after cleaning the balcony. " The fulfillment may not lie in what you see as relaxing, but in what you feel as relaxing", echoed her mind. A glimmer of sunlight was coming out of the rain cloud-like a butterfly coming out of the cocoon. The yellowish color of the light was painting a beautiful abstract theme on the canvas of dark clouds. A picture soothing to her eyes and her eyes glittered exactly like the eyes of her aunt after cleaning up the home.  Aadya's eyes were painted with exuberance seeing her polished balcony. OCD may be a boon, only for cleaned and happy minds!! Don't know, but Aadya and Jaya are on a mission to be happy in different realms!!